The Sawtooths are an amazing place, if only there were fewer people that knew about them but how can you blame them. This year's trip into the Sawtooths was to Baron Lakes, which is just behind Redfish Lake.
I was just going to do an overnight since the next day called for rain. On my trip, I was going to go to Alpine Lake then camp at Baron Lakes and the next day hike to Braxon Lake and out to the trailhead.
I got to Alpine Lake so early that I decided to head to the nearest lakes since I had plenty of time before I needed to get to Baron Lakes that night. My map said that Warbonnet Lakes were the closest and in the general area of Baron Lakes.
Warbonnet Lakes were a great choice and an added bonus to my trip. They both produced beautiful cutthroat and great views from the ridge to both Warbonnet Lakes and Baron Lakes.
About halfway through the night, it started to rain which put a damper on my plans the next day. I was going to go off the trail to some other lakes however I was not prepared for rain. So instead of hiking through the wet brush I just hiked back to the trailhead via the trail. I also had to hike around Redfish lake to get to my car since I only bought a one-way shuttle ticket across the lake, should have planned better. I did discover though how busy the Sawtooths can get, on my hike out I probably passed around eighty people hiking, it was insane. You definitely have to hike far into the Sawtooths to not find anybody. 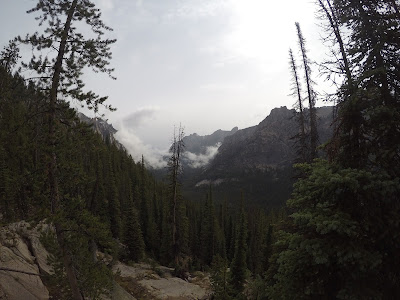