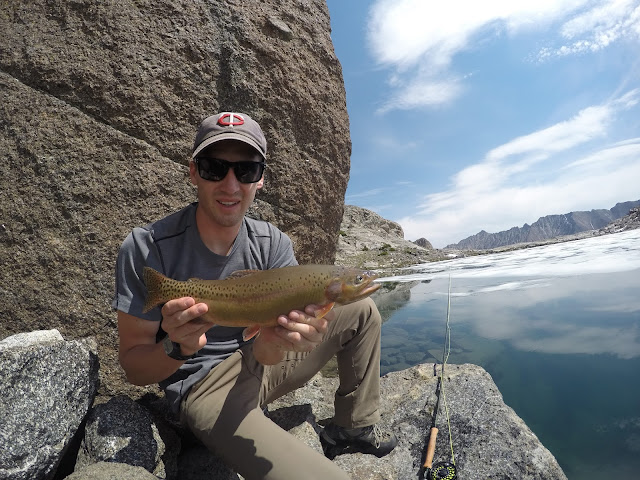 I have wrote about Airplane Lake before in this blog and have gone numerous times throughout the years but it always leaves me wanting more. Something about this lake that keeps drawing me back to it even after I just get skunked and cant catch and see a single thing. And this year has been one of those years that the lake won more battles then I could manage to win. This year alone I went to Airplane Lake four times, thats more then some people would go in their lifetime but I was determined to catch a big golden trout and I did just that.
The first trip was in mid June and on the hike up to the lake I could see that there was just way too much snow for the lake to be open and sure enough it was completely frozen. Two weeks later I tried again and this time there was less snow but still too much to even really fish as much as I wanted. Luckily we were seeing a few trout cruising the edges of the lake and I was able to hook into one of the biggest golden trout that I have ever caught.
The next few trips were complete failures, I went once in July and once again in the fall but still no trout and no sighting of trout. I think this next year I will try to plan a overnighter up there and really try and get a state record golden.